The Iron Lady Structure: Atmospheric Corrosion of the Eiffel Tower 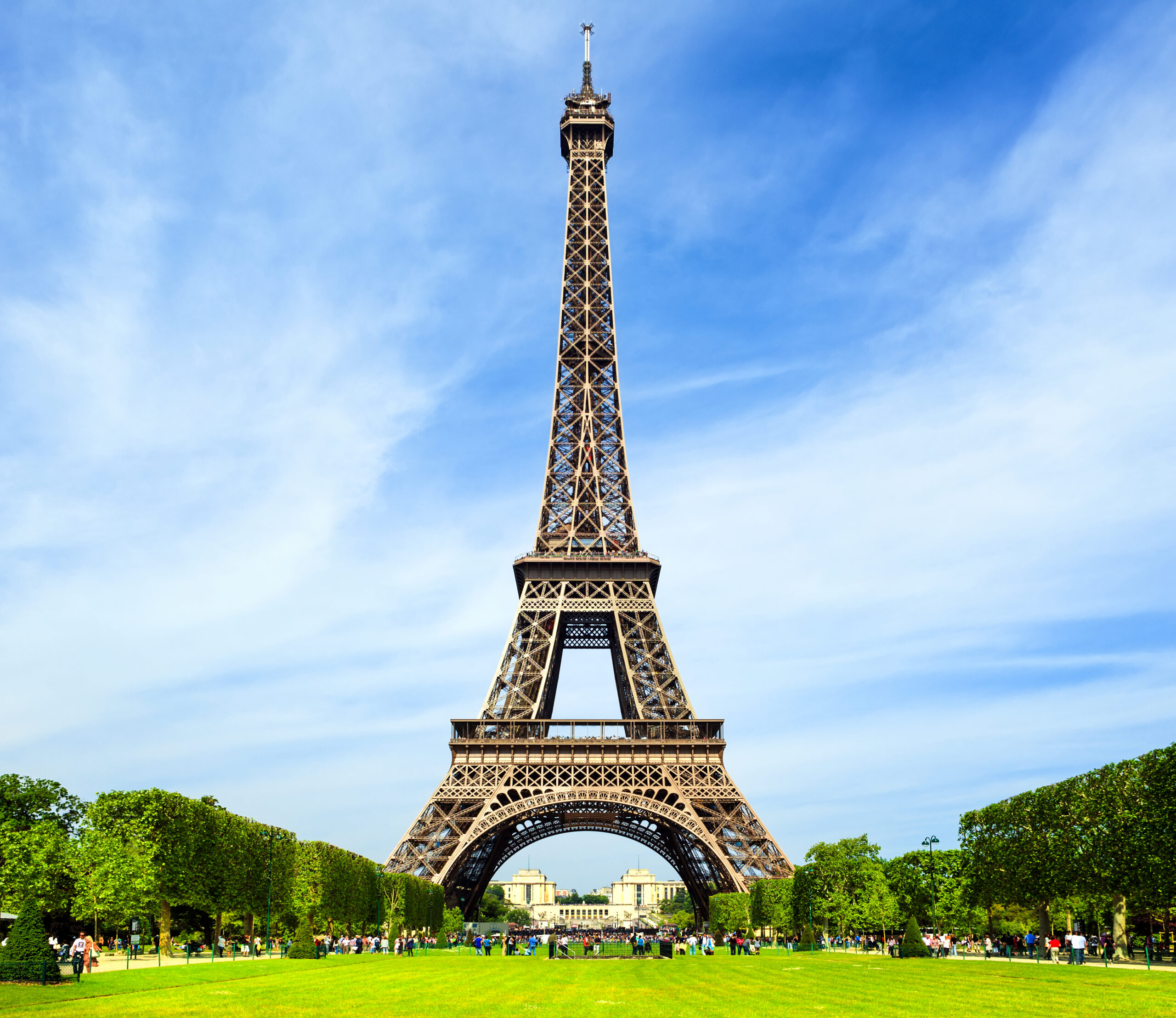 Gustavo Romero, Penspen's Director of Operations for Latin America, explores atmospheric corrosion to one of the world's most famous iron structures, the Eiffel Tower in Paris, France. Read his insight below.

When I am preparing the material for my classes on corrosion, I like to research and find cases that are interesting and catch the attention of my students and colleagues. Hence, I was able to read a bit about the interesting history of the Eiffel Tower, also known as The Iron Lady, a wrought iron wonder that has exceeded its useful life by design of 20 years. (The structure is currently 131 years old.) This is thanks to a rigorous maintenance program that is mainly based on the replacement of corroded parts and the use of a repainting scheme, with a frequency of 7 years, as a method of prevention and control of atmospheric corrosion.

This tower was built in 1889 with wrought iron in the city of Paris, France. It currently has a height of 324m to the tip of the antenna. Most of the people who visit this impressive iron monument are interested in taking the best photo of this monumental structure. I would also be interested to see the state of oxidation and/or preservation of the iron structure and analyse how a structure that was originally designed for a useful life of 20 years can be a good reference as a successful example of corrosion prevention and control. This is due to a good selection of materials during the time of construction and an adequate maintenance strategy, focused on extending the life of this asset. 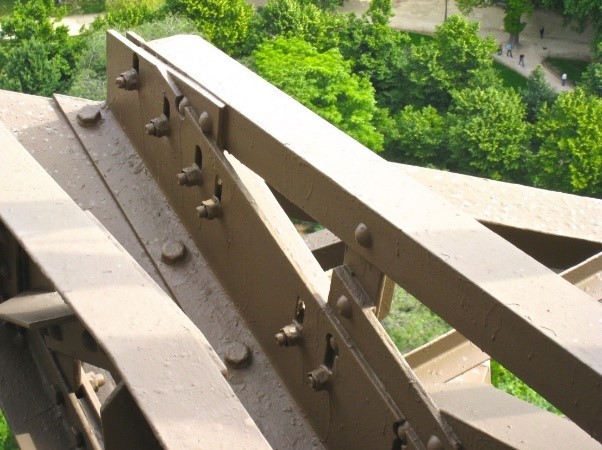 Formed by over 18,000 pieces of wrought iron

The purity of the iron used in the construction of the Eiffel Tower is the result of a process carried out in high-temperature furnaces. This process allows the carbon content to be reduced to a very low percentage and to eliminate almost all the sulfur, so the resulting iron is of high purity. It is made up of more than 18,000 wrought iron pieces joined through hot-rivets, with the intention of ensuring the fixing of the pieces. When the rivets cool, they contract and thus ensure the union of the pieces. This system must be kept in good condition to avoid corrosion in confined spaces between the rivets and the iron pieces.

I have read that some corrosion specialists have expressed different opinions regarding the possibility of other alternatives such as steel and/or galvanized steel and copper alloys, which may also be valid. At this point we would have to think, in 1889, what it would be like to make a different selection based on the knowledge of materials at that time and the risk that this would have represented?

Being a structure exposed to the environment, the predominant corrosion mechanism will be atmospheric corrosion (initiation and propagation). Other corrosion mechanisms can include erosion due to the presence of particles and wind, as well as by confined spaces in some areas and parts of the tower that allow the accumulation of moisture and concentration of aggressive species.

The initial corrosion reactions will be the oxidation of iron (Fe → Fe+ 2 + 2e−) and the oxygen reduction reaction (1/2 O2 + H2O + 2e− → 2OH−) in the moisture film formed on the surface iron, both as part of the initiation process of this mechanism. At the beginning there will be an increase in the pH of the cathode promoting the precipitation of corrosion products. From here, new reactions and compounds develop, depending on the aggressive species of the environment (SO2, Cl–) in what is called the propagation phase.

The iron forging process favours that the dissolution of iron is much slower from the point of view of the electrochemical process, because it keeps the anode and cathodic zones very close in terms of their electronegativity values. However, other factors come into play, such as changing weather conditions. (E.g. Magnitude of the wind, rain, cold, ice, solar radiation, cause the paint to blister and peel off, exposing the iron, which causes oxidation.) Erosion due to the presence of particles and wind speed, bird faeces and pollution, the latter much more pronounced today, will also accelerate localised corrosion processes in different forms and areas of the tower. 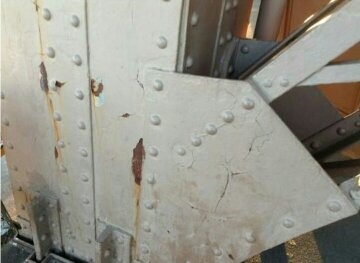 Atmospheric corrosion and damage to the coating

Prevention and Control of Corrosion

To prevent the corrosion of the metallic structure of the tower, we should think about the elements of the electrochemical corrosion cell: anode, cathode, ion conductor and electrical conductor, the climatic and contamination conditions. The method that has been used since its construction was designed by Gustave Eiffel himself, considering the separation of the ionic conductor (humidity and aggressive species in the atmosphere) from the rest of the elements through the application of a coating system, with a frequency of every 7 years.

The inspection and surface preparation programme is for parts with coating damage and surface corrosion and the manual application of 60 tons of two-layer urethane alkyd resin-based coating. Parts with severe corrosion are replaced by new parts that are also coated. Lead coatings were still in use as recently as 2001, when the practice was discontinued for environmental reasons. Recently, new lead-free pigment coating systems have been applied, tested by the SNTE (Société Nationale de la Tour Eiffel). To emphasize the shape of the tower seen from the ground, the tower is painted in three shades of brown specified by the SNTE architect: the lightest shade at the top and the darkest shade at the bottom.

Since its construction, it has been manually covered with brushes more than 19 times

For its inauguration in 1889, the Eiffel Tower was painted dark red. Then from 1892 it was painted ocher, followed by yellow from 1899, mustard up until 1954 and garnet until 1968. Since then, it has been painted brown (bronze). Since its construction, it has been manually covered with brushes more than 19 times – this means that a structure maintenance programme has been applied every 7 years.

25 painters use 1,500 brushes and rollers to apply 60 tons of anti-corrosive coating during an 18-month renovation period. Today, the cost of these repainting works costs approximately €4 million and lasts approximately 18 months (an advantage is that the work does not require the monument to be closed to the public at any time).

To view the article in Spanish, download the Insight below