The Survivor: Atmospheric Corrosion of the Great Kamakura Buddha 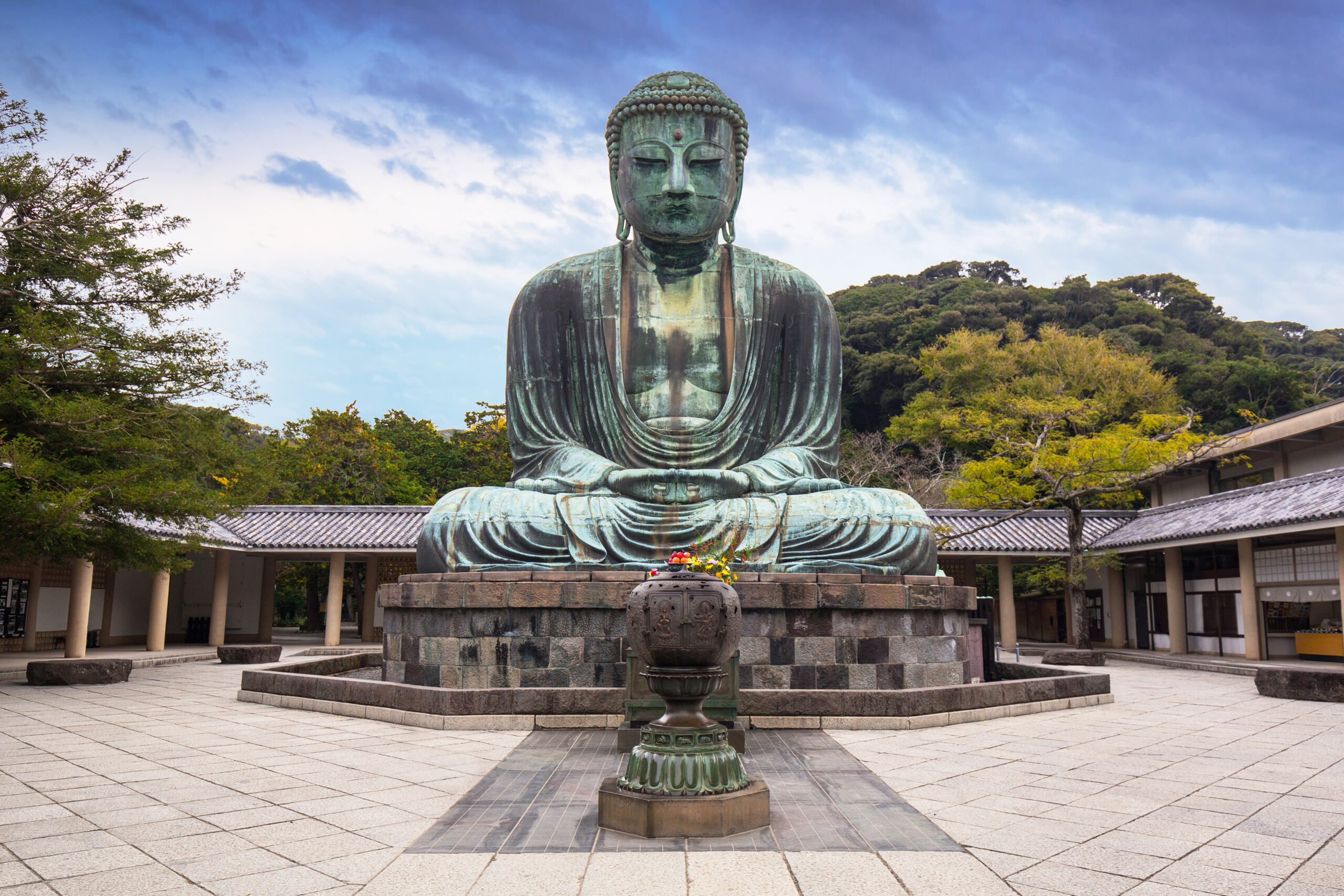 Gustavo Romero, Penspen's Director of Operations for Latin America, explores atmospheric corrosion to the bronze statue of Amida Buddha, known as the Great Buddha of Kamakura, the second largest Buddha in Japan.

Continuing with our series on tourism in the corrosion of iconic structures, we are looking at the city of Kamakura, Japan and the bronze statue of Amida Buddha, known as the Great Buddha of Kamakura.

This bronze structure has survived typhoons, earthquakes and tsunamis, as well as the inclemency of the saline environment. For example, acid rain, bird droppings and erosion by particles that come with the wind, since it has been exposed to the atmosphere for more than 500 years.

The question we could ask ourselves is ‘how has it been able to resist so many adverse factors?’ The scientific answer is that it is mainly due to the protective film formed by corrosion products and other compounds on the surface.

Buddhas are frequently depicted in statues, paintings and tattoos, being worn by individuals as amulets in order to inspire meditation and reflection on the principles of Buddhism. The Great Buddha of Kamakura stands with his hands on his lap and legs crossed (lotus position), which represents meditation and wisdom.

This statue is known as Kamakura Daibutsu or the Great Buddha of Kamakura. It is a bronze structure of the Amida Buddha, bathed in gold and has become one of the most famous icons of Japan. The statue is 13.35m tall and weighs around 93 tons, making it the second largest seated Buddha in Japan after the Buddha at Tōdai-ji in Nara.

In 1262 the construction of the statue was completed (there is no certain information for this). Many large statues of Buddhas are in pavilions, but the one in Kamakura is quite special because it is in the open air. Initially a pavilion existed, but it was destroyed several times by typhoons and earthquakes, so since 1498, for more than 500 years, the statue has been exposed to the atmosphere. The Great Buddha appears seated in the lotus position with his hands forming the typical meditation gesture, in a posture that represents peace. 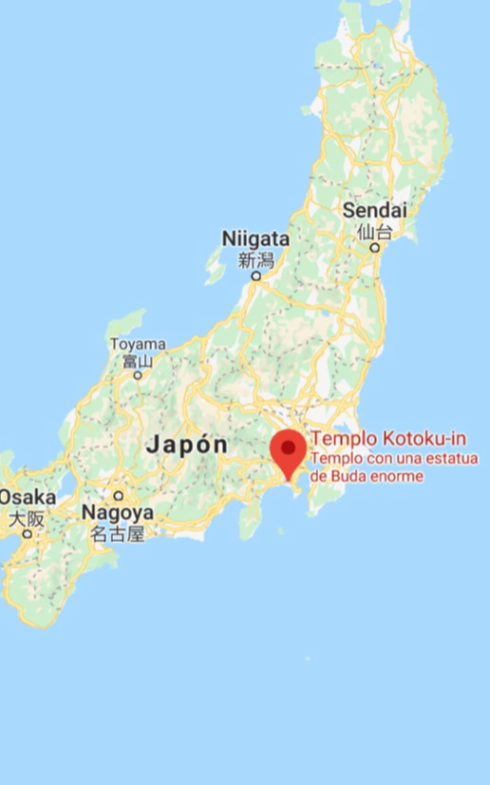 Location of the Great Buddha of Kamakura, Japan

Material and Construction of the Monument

A fact that draws attention is that the composition of the alloy contains a percentage of lead (Pb) higher than expected – up to 17% – which could be contributing to the durability of the alloy to aggressive exposure conditions and therefore its resistance to corrosion.

Specifications for types of bronze, such as C 937 or UNS C93700 – also referred to as SAE 64 – recommend a maximum percentage of lead of up to 11%, in order to increase the resistance to corrosion and also gives self-lubricating properties to the alloy.

The distinctive characteristic of lead is that it does not alloy with copper, hence it is distributed according to the melt technique in the mass of the alloy, without mixing intimately. The Buddha went through a casting process of separate pieces that were then assembled, leaving the interior of the structure hollow. Today, these different joints are visible, especially from the inside. The thickness of the pieces varies depending on the area, but ranges from 3cm to 12cm in the thickest parts. 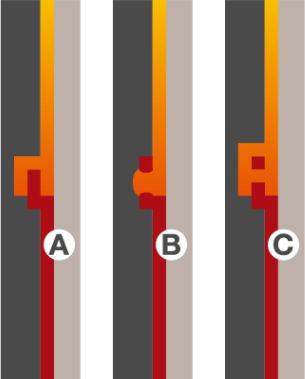 The metallic structure consists of three different phases: a solid phase containing a relatively large amount of Cu, a eutectoid and δ-intermetallic compound phase, and a Pb phase.

Some traces of gold (Au) have also been found in samples taken from the monument. According to the historical information of the Buddha, he was originally bathed with this element to give it more shine.

The phenomenon of the atmospheric corrosion of copper has been studied in different environments for several years, which means that information about this problem is available. Copper is generally safe for use because of its good resistance to corrosion in dry atmospheres. However, patina (a layer of copper salts that is generated on the surface of said metal after the spontaneous corrosion process) appears in humid atmospheres. In this case, it has been concluded that corrosion is necessary because it also has an aesthetic impact on the monument. 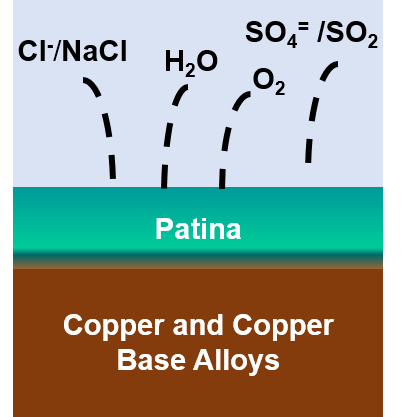 Due to rapid industrial growth, air pollution is a serious problem in the world, especially in Asia in recent years. The most important industrial region in Japan is Tokyo-Yokohama, precisely the area where our monument is located. Hence, atmospheric corrosion is strongly influenced by the presence of sulfur species such as, for example, sulfur dioxide from the combustion of fossil fuels and chlorine in sea salt aerosols and the hydrogen chloride emitted by incineration plants. The typical salts that contain chloride and the gases that contain sulfur are deposited or adsorbed on the exposed copper surface and due to the hygroscopic nature they absorb water from the atmospheres, favoring the electrochemical corrosion process whose behavior will depend on the corrosion products formed. environmental and climatic conditions, location of the monument and time. 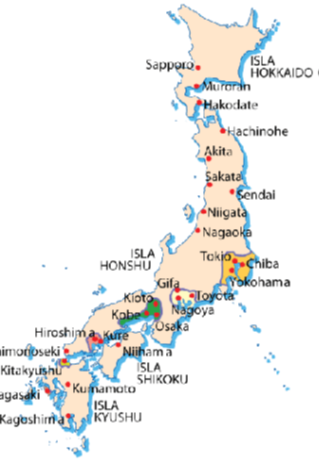 Stages of the Corrosion Process

Corrosion initially begins as a process of an electrochemical nature. Since the surface electrolyte layers are thin and periodically dry, the reaction products are deposited as solid surface layers that then participate in corrosion reactions. The nature of the corrosion process also becomes chemical. The stability or solubility of the components of the surface layers, especially the ability to bind aggressive atmospheric components in salts of limited solubility, have a fundamental influence in keeping the corrosion rates of copper and its alloys low under atmospheric conditions. The high resistance of copper and its alloys to corrosion in atmospheric conditions derives from the protective function of the corrosion product layer, generally called patina. Surface layers on bronze and copper are formed by processes repeated periodically during wetting and the removal of basic salts from saturated electrolytes at a suitable but not too low pH.

Over the years and due to different factors such as acid rain, atmospheric pollution, wind, organic deposits or photochemical reactions, these present a greenish-bluish appearance of different shades, depending on the degree of corrosion they present. Through a computerised study, the color changes in the Buddha were studied using photographs taken in different periods up to 1994, finding that the greatest color changes occurred between 1965 and 1985. This coincided with the time when the emission of sulfur dioxide and other pollutants were a serious problem in Japan.

In 1992, the Tokyo National Research Institute of Cultural Properties (TNRICP) began the study of the relationship between the atmospheric corrosion behavior of the monument and the environmental conditions of exposure. The study was carried out through the analysis of the composition and structure of corrosion products, meteorological conditions, monitoring of pollutants – sulfur dioxide (SO2) and nitrogen dioxide (NO2) gases, ions by collection of fog and rain: chloride (Cl-), nitric acid (NO3) -), sulfate (SO4 =), sodium (Na +), ammonium (NH4 +), potassium (K +) – and exposure of controls (similar alloy) for study.

From the environmental and meteorological conditions, the results showed that pollutants can be easily transported to the Buddha from the industrial zone (Tokyo-Yokohama) by north winds and precipitation (back side) and sea salts by strong south winds (front side). This has favored the presence of different corrosion products, depending on the location on the monument.

Effects of the north and south winds, the Marine Zone and the Tokyo-Yokohama Industrial Zone

From the analysis of corrosion products in the different areas of the Buddha using fluorescent X-ray spectroscopy (XRF, fluorescent X-ray spectroscopy) and X-ray diffraction (XRD, X-ray diffraction) compounds were found. Copper, lead and tin in the form of chlorides, sulfates, oxides and hydroxides, as well as carbonates and other forms as a result of the same electrochemical corrosion reactions and chemical reactions between the same generated compounds are responsible for the different color tones that can be seen on the external surface of the Buddha.

Due to their location, a higher proportion of the corrosion products with the presence of chloride were found in the front area and the compounds with the presence of sulfur in the rear area. Phosphorus (P) was detected in all the samples taken, probably coming from the excrement of pigeons and other birds and compounds with calcium and aluminum, the latter as a result of the dragging of the wind from the ground towards the Buddha.

After 55 years without execution oo major maintenance, in early 2016, restoration work was carried out on the monument, led by the National Research Institute of Cultural Properties of Tokyo. The work lasted 2 months and involved a team of 10 people. It was not possible to use cleaning methods such as sandblasting due to the importance of preserving the structure of the monument.

Some of the activities that were carried out were: 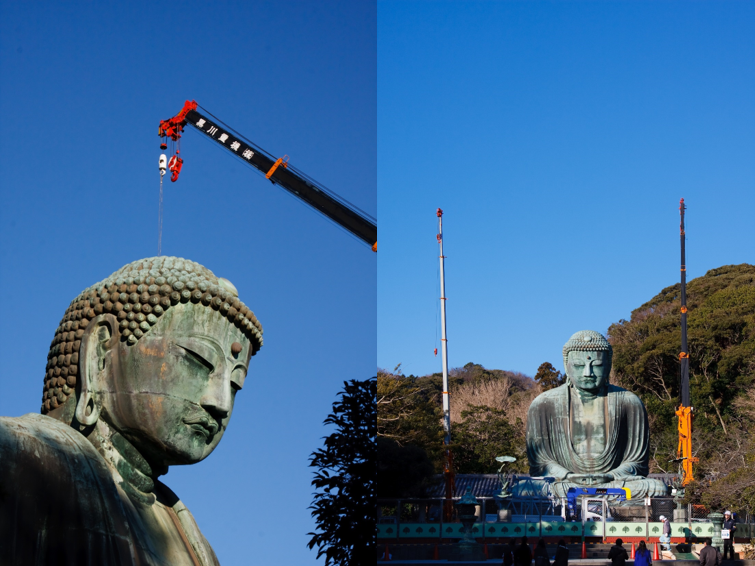 Maintenance and repair work to the Great Buddha of Kamakura

If you have the opportunity to visit this monument, you will be able to appreciate the multi-colored beauty generated by the chemical reactions of different corrosion products and other compounds with environmental pollutants. Today, we can see shades of pale and dark green, dark brown, orange, black, yellow and blue, white, and different shades of red.

To view the article in Spanish, download the Insight below